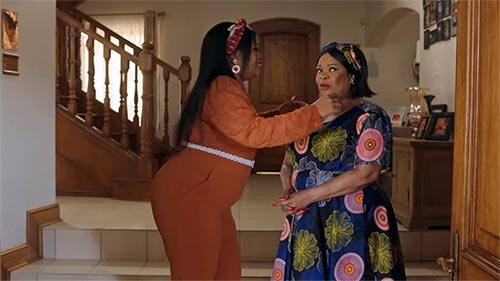 Mother’s Day is coming up and the Madladla’s are all preparing to impress the fastidious Mam’Shiela and “win” Mother’s Day.

Charlotte is forced to postpone her and Thobani’s 6-month dating anniversary. Bheka is worried that Fairlady is not up for the task of getting the perfect gift.

After Vuli and his family have dinner at Mam’Sheila’s, Charlotte, who is ‘visiting’, sets up a group selfie that turns out beautifully. Mam’Sheila loves it, so she gets it printed and hangs it up the wall.

But when Fairlady sees the ‘family photograph’, she is outraged and conspires to create her own, excluding the other Matlakala and her family.

Charlotte is kicked out by her cousin and rocks up at Mam’Shiela’s place in the middle of the night with all of her stuff.

When Mam’Sheila learns that her half-brother Uncle Funani is coming to visit, she summons her sons to avoid reaching into her own pockets to assist in Funani’s endless list of problems.

But Vuli and Bheka come prepared, knowing very well what Uncle Funani coming to town means for their wallets.

Nhlaka’s world is set on fire when he meets one of Funani’s suspect girlfriends, Thenjiwe.

To her surprise, Pastor Ndlovu turns out to be a single woman who gets along with Pastor Vic. Jealousy causes Mam’Sheila to act up throughout the special dinner she had prepared for Pastor Ndlovu before she found out she is a woman.

Matlakala hosts a supperware party but she’s too uptight at the party, causing people to leave. Fairlady convinces her to have a glass of champagne to loosen up.

After a couple of glasses, Matlakala turns into a fun, party starter making everyone dance. Bheka and his brothers decide to have a boys’ night where they teach him how to ask women out

Fairlady wants to be a reality star and with Nhlaka as her producer, starts filming her own internet reality show. But when Mam’Shiela gets a taste of the “fame” and the drama, she literally steals the show.

Vuli mistakes a spiritual marriage retreat in Magaliesburg for a romantic getaway to spice up his marriage. With a bag full of condoms and Bheka’s stamina-potion running through his veins, a weekend of prayer and medication awaits him.

A blast from the past, who happens to be Bheka’s ex and the “makoti” who got away, is back in town and will be Mam’Shiela’s honorary guest at Sunday lunch.

Fairlady’s jealousy escalates as she becomes convinced that Stella is trying to inveigle herself back into Bheka’s life and family – and she’s determined to stop her.

Broody for her own wedding and marriage, Charlotte tries on Mam’Shiela’s wedding ring, just to see how it fits, but it gets stuck.

Everyone is rallying behind Vuli to be named the new principal at Vuli and Matlakala’s school. But when Matlakala is announced principal instead, everyone, without exception, is shocked to the core and Mam’Shiela makes an even more shocking request of Matlakala.

Charlotte has a very strange dream that she is married to Bheka. She tells Thobani, who tells Vuli, who tells Matlakala, who cannot resist slipping it to Fairlady.

It’s not often that we see Mam’Sheila scared or intimidated… but that’s precisely what she is when she gets off the phone with her Mamazala, who tells her that she is coming to town.

Vuli’s car breaks down again, and a few days cycling to work turn into an expensive hobby that drives Matlakala up the wall.

A crime wave in the area has Mam’Sheila worried about security, and in turn everybody else worries too.

They step up with their own ideas for what should be done, especially when Mam’Sheila notices strange things around the house – missing food in the fridge and later, footprints in the flour that she scatters on the kitchen floor.

Mam’Sheila is desperate to get onto the Senior Church Committee, but the strange behaviour of her family may spoil her chances with the conservative church elders.

After Fairlady overhears the end of what seems to be a troubling cell phone conversation between Bheka and his banker, confides in Matlakala about her biggest fear – losing their wealth and Mam’Sheila placing the blame on her. Matlakala sets up a three-step plan and shopping detox for Fairlady.

Mam’Sheila’s 70th birthday party is coming up. In working on the guest list, Sheila finds out that some of her friends are dead while some have been put in old age homes and don’t even remember who she is.